Sun was shining today but the wind was still blowing strongly – again fortunately it was mostly a tail wind so would help us a lot.  We were also able to leave the baggage at Argeliers so for the first time didn’t have the 18Kg of weight on the bike.  Set off along the roads towards Narbonne and with a good tail wind we were making good progress.  We had a look at the path along the Canal du Midi but it was a bit too rough and bumpy so stayed on the roads to Narbonne.  There wasn’t an obvious cycle path through Narbonne (possibly due to the roadworks so we passed through the town centreand then just south of Narbonne we joined the path alongside the Canal de la Robine.  This was unmade and pretty bumpy but it added another “canal” to the list.
After a while we went back on the roads as the canal path was beginning to turn in the wrong direction.  The area before Gruissan Plage is a salt marsh with flat roads and with a strong tailwind we let the bikes go.  Fairly soon I was well over 40km/h and Pierre was up towards 50km/h.  Fantastic fast run with great scenery and the Mediterranean just visible in the distance.  At that speed we soon approached Gruissan Plage where the wind was making it impossible for cyclists going the opposite direction to us – they were all walking.  On through the town and finally towards the beach.  Had to be done – we pushed our bikes out onto the sand and down to the water’s edge despite the sandblasting we were getting.  A couple of quick photo’s and a rapid retreat to the bar.

Sitting in the sun with a cold beer in hand it was a bit weird thinking we had done it.  Cycled from London to the Mediterranean a trip of nearly 1,900km and here I was at the end of it. 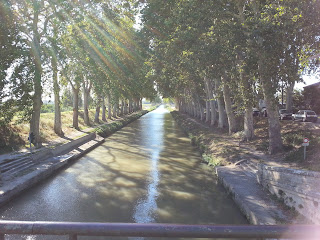 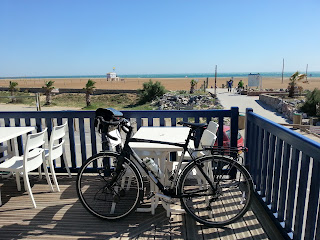 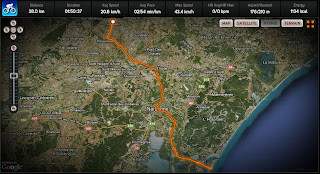