The morning at Carcassonne was very windy, cloudy and spiting with rain.  Still we managed to get our tests away reasonably dry and were soon packed up and ready for the road.  The traffic was busy and as we headed out past the old Cite there was an enormous crunch behind me.  Pierre stopped as he thought I had fallen off or something.  Looking round a Campervan which had been following close behind me had got stuck under a bridge.  Nothing we could do so headed off on the busy roads out of Carcassonne.  This is the first time I had encountered aggressive French drivers.  Some were using their horn at junctions and one driver deliberately didn’t stop at a junction and very nearly ran me off the road.
Soon we were out of Carcassonne and onto the back lanes which were much more quiet and pleasant.  It was still raining a bit which was actually pleasant after the heat of the previous days.  It wasn’t practical to follow the Canal du Midi at this stage so we basically took the most direct route available on the minor roads.  We were making great time as the wind was behind us and was helping us along.  At Puicheric we re-joined the Canal du Midi for a short while and then cut straight across a loop on the canal to join it again at Argens- Minervois.  The canal path was too rough to cycle on so we had to stick to the roads.
We left the Canal again at Vertenac-en-Minervois where we turned into a headwind and straight up a hill.  This made progress a lot slower and the gusting wind was blowing me around a bit so needed to take care.  We also crossed the river Aude a few times – very scenic river.  Still we made good progress and arrived in Argeliers just after lunchtime.  First thing I did was grab a cold beer, head for the shower and settle down for a bite of lunch.  Penny (aka Joe’s support assistant) was arriving at Montpellier that afternoon so soon we were all getting stuck into some chilled local rose leaving Pierre to fall asleep on a chair. 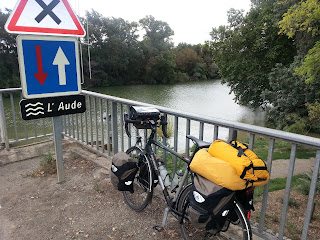 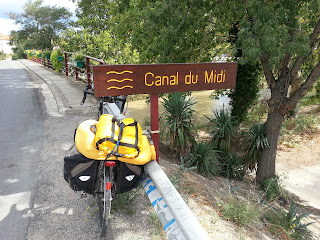 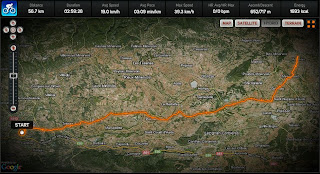