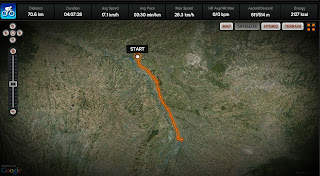 Overnight, it was very hot and Joe had to evict ants from his tent.  At around 3 am it rained. They had pitched their tents and parked their bikes under trees as rain was forecast., Although the tents were a little wet this morning, they’d been protected from the worst of the rain.
It was cloudy when they got up, but still hot. They had breakfast (coffee and croissants) beside the canal path and pushed on. 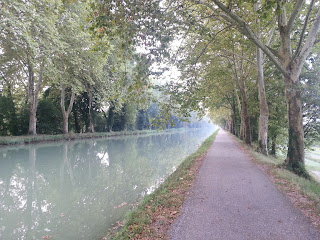 The canal path first thing in the morning.
The clouds broke as they cycled, the sun burned through and it got very very hot. They didn’t pass any chemist’s temperature displays till they got to Toulouse but it was extremely hot.
When they stopped for lunch, they sat in the shade and when the sun moved round they had to move inside as it was unbearable. Other tables followed suit. Lunch for Joe was a Salad de chevre chaud and for Pierre, a ham and cheese sandwich. They had two carafes of water with their lunch.
They noticed that the canal side was markedly cooler and the trees provided some shade – it was not cool but more bearable. Today there were lots more locks - for them it was a matter of cycling up bridges but not coming back down the other side! They passed a few boats but not as many as the previous day. 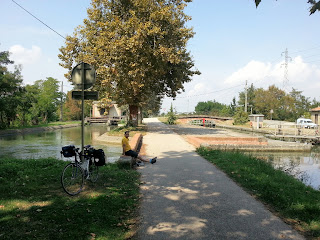 Pierre grabbing some shade.
Throughout the day, they stopped for liquid, ensuring that they stocked up with water and having panaches and oranginas in cafes. Sunscreen was also important to protect them from the sun.
The canal was full of fish – they saw lots of them. Lizards basked on the path, dashing away when they approached. A duck who was sat on the path was very reluctant to move and only did so when they were about to run it over! Water voles splashed in the water beside the bank.
The cycle path took them into Toulouse where they had to cross a busy road junction to get from the Canal de Garonne to the Canal du Midi. Their hotel was close to the Railway Station and the Canal du Midi so easy to find and in the midst of cafes and bars.
They checked in, drank lots of water, showered and had some cold beers and panaches and two carafes of water. Their bikes chained up in an inner courtyard of the hotel, they explored Toulouse on foot, walking 3-4 kms. Toulouse was very busy with restaurants and hotels full. Cold beers in Le Capout next to a fine water sprayer in Place Wilson was a welcome stop
At 6pm this evening, it was 38 degrees and by 10 pm, the temperature had only dropped to 28 degrees.
They headed off for dinner at a Creperie in Place St Georges. Joe had a buckwheat complet (ham, cheese, spinach, mushrooms and eggs), Pierre had a similar one with meat instead of ham, and they washed them down with 1 litre of rose wine and a carafe of water. They then had more crepes – Joe choosing one with lemon and sugar and Pierre one with ice-cream.
Then it was back to their rooms in the hotel and another hot night, but this time not under canvas.
70 Kms covered today, and a total of 311 km so far this trip.
Posted by Joe's Support Staff at 15:15