Fans in the rooms helped them to sleep, and so after breakfast they made a good start on the cycle routes of Toulouse. The cycle paths around Toulouse were dis-jointed but basically ok, though at one point they almost cycled onto the Autoroute des Deux Mers, just stopping in time!


The cycling was fantastic to Port Lauragais, and they were cycling at about 22km per hour. They were able to cycle faster due to the quality of the route, the fact that it was cloudy and cooler, it was spitting with rain and there was a slight tail wind. The canal path ended at Port Lauragais, which is also a service station on the Autoroute des Deux Mers which just happens to serve excellent Cassoulet.  Over Cassoulet for lunch (of course) they decided that they’d made good progress and could get further than the planned evening stop at Castelnaudary.  So they spoke to the Tourist Office at Port Lauragais who cancelled their Castelnaudary Hotel and told them of a campsite at Carcassonne, which would be open. They got the directions and headed off again. They really turned up the speed – to 30Km and made good progress following small roads alongside the motorway. They joined a main road at Bram and had panaches. They had cycled 84 Km so far. They carried on following the main road until 8km outside Carcassonne. There they turned back onto the Canal du Midi as they had plenty of time to come into Carcassonne along the Canal. They exited the Canal at the Railway Station and walked through the pedestrian town centre to avoid having to make a big circle. That brought them to the old town and they then turned into the campsite which was not far from the old city.


It was windy when they put their tents up. When they had finished setting up they needed some beers and food. There is a restaurant at the campsite, or they had a choice of walking into the old city, or into the rest of the town.  After a couple of beers as aperitifs, they had steak frites and two litres of rose and hoped to sleep well.  They had cycled 111 km today and it had been a good day. Their total Kms cycled so far was 422km.

Canal side bar on the Canal du Midi 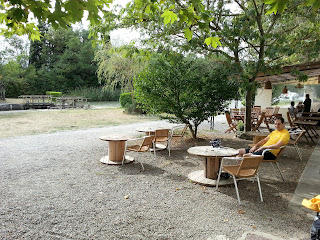 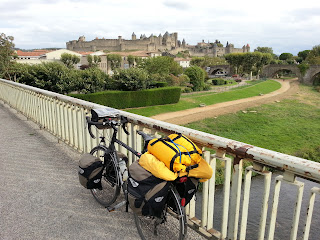 The route - 111Km, longest one of the entire trip 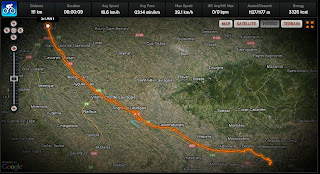